Time is Crucial in Stroke Recovery

Stroke and TIA are the first cause of acquired disabilities in the world.

This video explains what is a stroke, and what can be done to accompany the treatment and rehabilitation of stroke victims.

Stroke is the first cause of acquired disability in the world

A stroke, brain attack, or a Cerebrovascular Accident (CVA), is the sudden death of brain cells caused by a lack of supply in oxygen to the brain.

There are two main types of stroke:

What are the consequences of a stroke?

Resulting disabilities will vary depending on stroke location and severity.

After a stroke, brain cells die in the affected areas resulting to damaged or even lose neurons. Patients will often suffer physical disabilities such as partial loss of motricity or hemiplegia, sensory loss, language disorders, aphasia, visual disorders, and even memory loss.

Level of recovery will vary from patient to patient.

Starting rapidly a rehabilitation program is key to recovery. 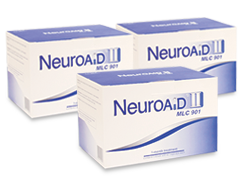 * Disclaimer: This statement has not been evaluated by the Food and Drug Administration. This product is not intended to diagnose, treat, cure or prevent disease.
Products effects of recovery may vary among individuals.

Make the most out of your precious recovery

This form allows the NeuroAiD™ product specialists to better understand your specific case in order to give you an appropriate answer.

Our well trained and dedicated staff will get back to you within 1-2 business days . All particulars remain strictly confidential.

(Please note that fields with * are mandatory)

By submitting this form, I agree to the privacy policy and understand that I will be contacted by Moleac & NeuroAiD team via the contact methods submitted.

Before submitting your enquiry, please note that your doctor is in the best position to advise you on the ideal treatment for your individual situation. In case of doubt, always seek advice from your doctor.